The S1 has an amazing feature set and offers a proper broadcast solution to community, educational and student radio stations that need a versatile, reliable radio broadcast mixer. It has a ‘no compromise on quality’ approach with excellent mic amps, comprehensive facilities & simple, reliable operation.

The Sonifex S1 mixer is a high performance compact, low cost, fixed format mixing console designed for on-air radio use. It can be fitted flush into a desk-top or can be rack-mounted by the addition of optional rack ears.

The rear connectivity panel can be rotated 90˚ onto the base of the unit providing easier connection to the unit when it is rack-mounted. It has an integral universal switch mode power supply, which uses an IEC inlet.


It maintains the same front panel ease of use found on the Sonifex S2 whilst providing advanced automated features not seen on any other product currently available on the market.

Input source buttons at the top of each channel strip are used to route the connected source to the mixer buses.

All of the balanced XLR input connectors have a 10dB gain switch on the rear panel for use with unbalanced or low level input sources. The XLR microphone inputs have individual +48V phantom power switches and a gain calibration potentiometer providing up to 65dB of gain for the preamp.

Input channels 3 and 4 use an XLR and a combination XLR/stereo jack connector to allow a microphone input and both a balanced mono or an unbalanced stereo line input to be used.

Input channel 5 acts as microphone input or as a telco input with a dedicated cleanfeed output, with available line hold remote for connection to a telephone hybrid.

Input channel 6 is a balanced stereo line input on XLR together with a stereo cleanfeed input on balanced XLR for use with ISDN codecs.

Input channels 7 & 8 have stereo balanced XLRs and stereo unbalanced phonos on the rear and channel 7 also has a 3.5mm insert jack socket on the front panel for use with an mp3 player/iPod.
Input channels 9 and 10 provide a stereo analogue XLR input and stereo digital S/PDIF and TOSLink optical inputs.

Any channel which has the fader up and the ON button selected is routed to the main PGM output(s).
Gain for each channel is trimmed by the front panel TRIM control providing ± 12dB of gain.

Equalisation is provided on every input channel, allowing up to 7dB cut and boost at HF (6.5 kHz) and LF (100Hz). A PAN/BAL(ance) control is available to facilitate stereo imaging.

The use of VCAs controlled by the ALPS long throw 100mm faders give a smooth, repeatable response and ensures tight stereo tracking while eliminating mechanical and electronic noise.

A digital stereo PGM output is provided in XLR AES/EBU or phono S/PDIF formats. The output can be referenced to an internal clock source between 32 kHz and 96 kHz or external synchronisation sources can be connected via S/PDIF, AES/EBU or BNC wordclock. The illuminated DIGITAL SYNC LED shows when the digital output is locked to either an internal or external clock.

The S1 has two Auxiliary buses that can be configured in either pre-fade or post-fade mode. Each channel can be routed to these buses using the potentiometers provided on each channel strip. Each AUX output has a trim control knob operating between fully attenuated and unity gain. Aux buses can be used for a wide range of purposes including recording telephone conversations, generating different mixes for output, connecting to audio processing equipment and much more.

The control room loudspeakers, presenter’s headphones, and guest headphones are on 6.35mm stereo jack sockets. Front panel control knobs are used to vary the monitor and headphone levels and the presenter’s headphones can be plugged in to the front and rear of the mixer. The control room monitor loudspeaker and headphone levels are variable between 0 (cut off) and 10 (max). An illuminated MUTE LED shows when a live microphone channel has muted the speakers and there are two pairs of MUTE contact outputs available to illuminate a ‘MIC LIVE’ light.

A five way electronically interlocking switch bank selects the source routed to the speakers and presenter’s headphones from either of two external inputs (EXT 1, EXT 2), the PGM, or AUX Outputs. The buttons illuminate to show the selected source, PGM, AUX 1 and AUX 2 in green, EXT 1 and EXT 2 in red. The external inputs can be used for monitoring an off air signal or another studio output.

Green illuminated AUTO CUE/PFL buttons adjacent to each level control allow the monitoring of PFL when an input channel has been selected to CUE/PFL, either to the monitors or headphones.

For the Presenter headphones, SPLIT CUE/PFL can be selected which places the selected source in mono in one ear and PFL in mono in the other.

A pair of bright 21 segment LED meters can be configured to show either VU or PPM metering. The meters show either the PGM output or the selection heard in the presenter’s headphones, selectable by PGM/MFM (Meter Follows Monitor) button.

A separate TALKBACK button is provided to allow the Presenter to talk to a Guest. The S1 uses input channel one as the talkback source. Global talkback can also be configured (see the Programmable GPIO section) to allow every mic channel to communicate with the Presenter and Guest headphones.

A separate TALKBACK 9-way D-type socket on the rear panel can be used to connect the talkback output and input to and from other studios.

The remote outputs for each channel are highly configurable providing every possible option required to interface your external equipment to the mixer. Each channel input has its own START and STOP remote controls, except the microphone inputs which have only START outputs. (If you wanted a MIC stop control signal, you could configure this using a GPIO). Each remote can be configured to be triggered from a variety of sources, including the ON button and the CUE/PFL Button. The remotes can be set-up to be either pulsed or continuous latched outputs, and if in pulsed mode the ON button has the capability to produce repeated start pulses on additional ON button presses, when the channel is ON with the fader up.

In the case of the Telco & Stereo Cleanfeed outputs you may want to generate start and stop remotes independently of the position of the fader, so that the hybrid or codec can be triggered to connect before the channel is opened. This is possible in ‘Telco Mode’ where a ‘start’ is sent when the ON button is initially pressed & a ‘stop’ is sent when the ON button is pressed again, turning the channel selection off. In addition the channel can be configured to show the state of the external equipment, e.g. using a tally back GPI signal from an automation system, the ON button can flash green when the end of a song is being reached.

The S1 also has five General Purpose Inputs/Outputs (GPIO’s) available. Each input/output has been designed to be very versatile & almost any operation with the mixer can be achieved when utilising them.
A GPI can be configured using the SCi software to perform up to 10 different operations from a single input. For example, in an automated playout situation, you may want to:

This configuration would use 9 of the 10 operations available for an individual GPI.

The GPO could then be linked back into one of the GPI’s with the input configured to:

This would allow the guests to freely talk to each other until one of their microphones goes live. This is just an example of the potential uses of the programmable GPIOs. 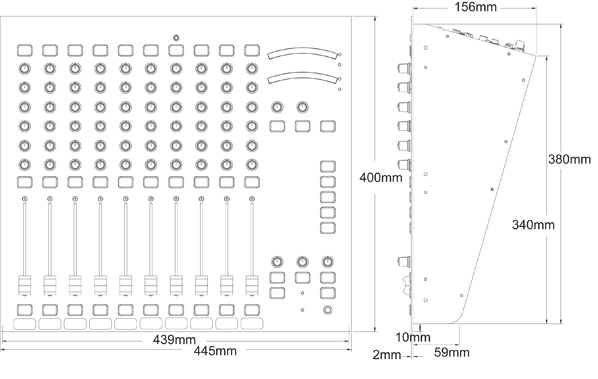 The S1 mixer is highly configurable and has numerous options allowing the mixer configuration to be tailored to your requirements. Using the freely available Sonifex SCi software, every parameter of the mixer can be set up with ease.

This product has settings that can be adjusted using the Sonifex SCi (Serial Control Interface) software. To download a copy of the SCi software, please use this link > 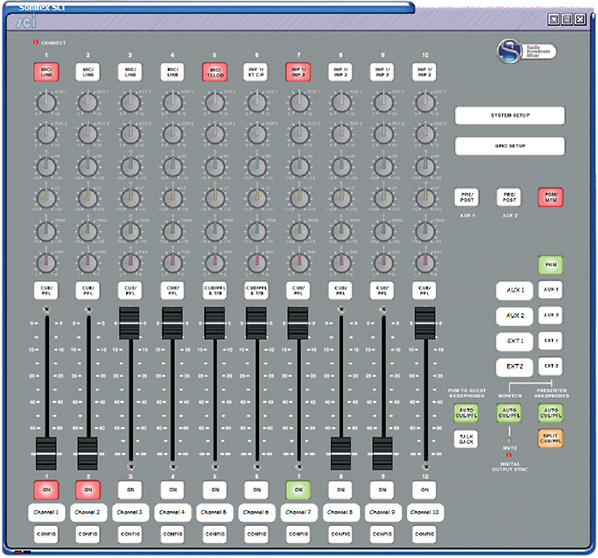 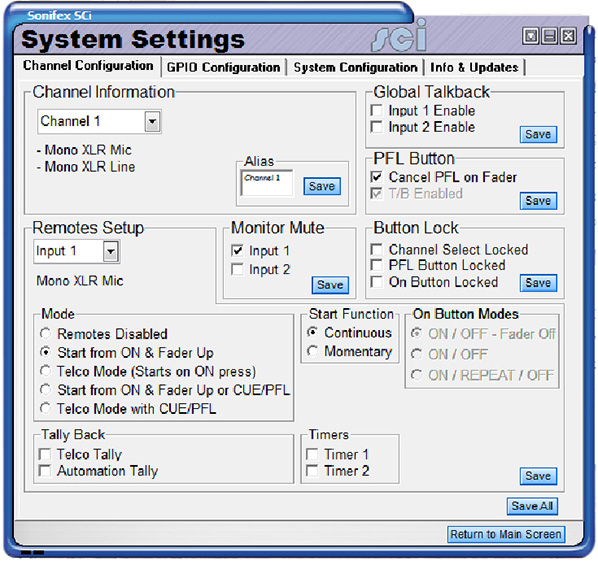 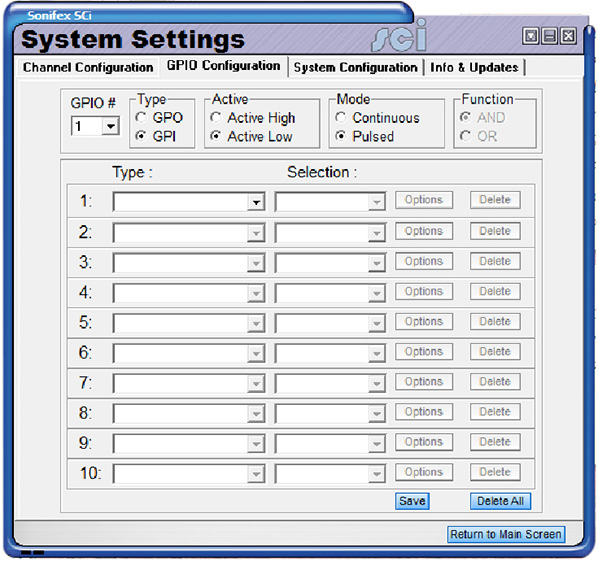 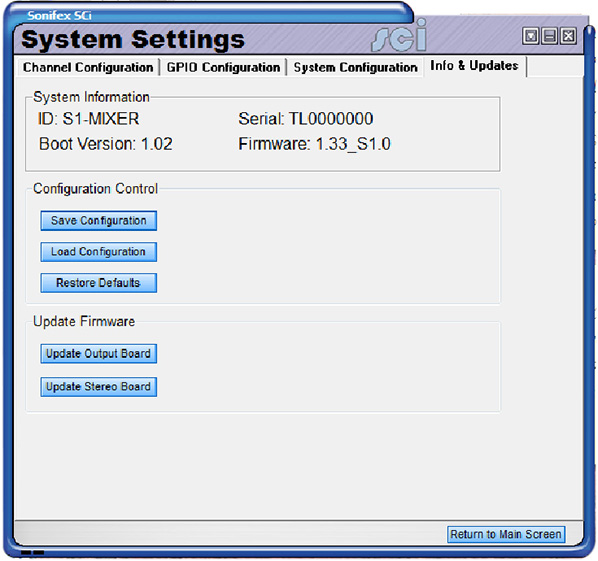 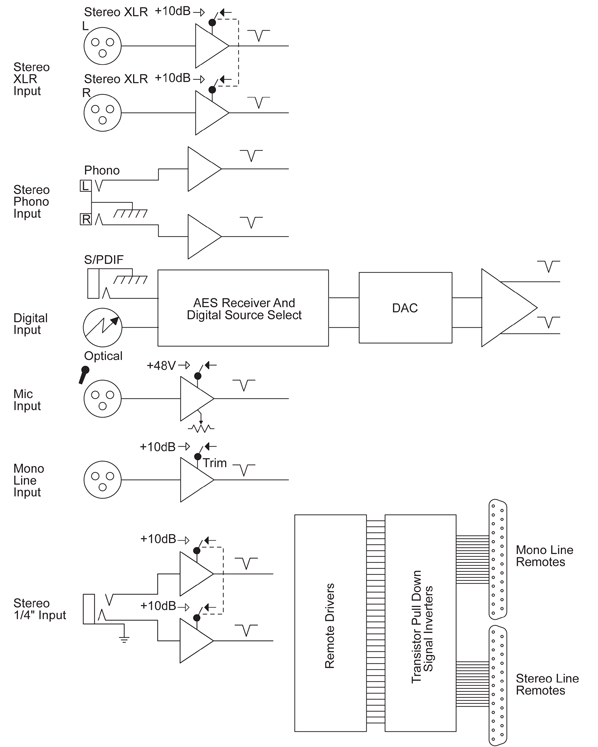 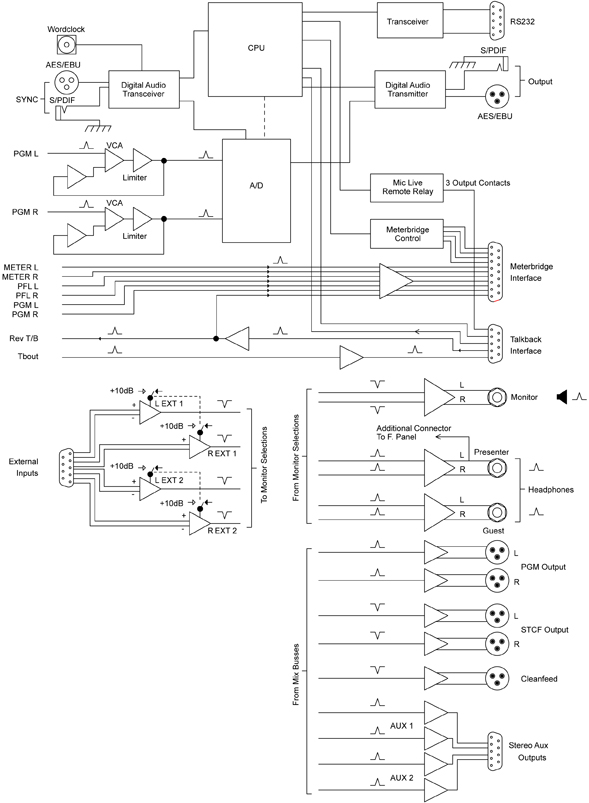 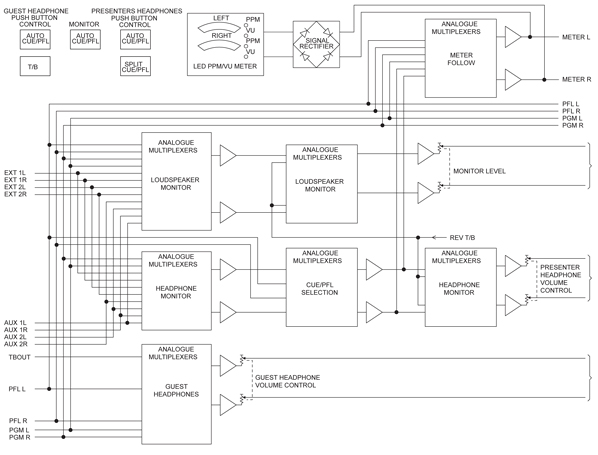 More Information About This Product