The first intercom to be released is the AVN-TB10AR, a 10 button, 10 station device. Comms can be made as a Talk action, a Listen action or a duplex Talk/Listen action to/from each station. RGB LEDs in the key-cap buttons help to show which action is being used and there is also a Callback button for when youre unavailable to receive a call, together with a Callback list on the front panel display. The stations can be anywhere on the AoIP network with auto-discovery of new stations.

These products are using new technology to their best advantage offering simple solutions which are powerful and configurable with very simple CAT5e cabling. Each unit has both 4-wire and AoIP connectivity, with all audio transferred over a network, enabling it to be used in existing legacy systems, or in completely new AES67 AoIP networked audio infrastructure. With dual 1Gb lan ports and a 1Gb SFP fibre port the products can be used in larger networks too 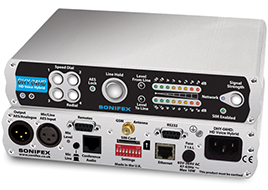 The new DHY-04HD is an HD Voice & GSM hybrid for handling high quality voice calls, ideal for studios in remote locations, for OB vans and trucks on the move, and in emergency situations where a telephone landline cant be guaranteed.

Using a 3G or GSM cellular network, it can receive and make high quality broadcast calls of 7kHz bandwidth, converting the 3G or GSM call to the 4 wire audio signal to and from a connected mixing console. The module used in the DHY-04HD is quad-band GSM and 5 band UMTS/HSPA+, so it can take and make calls on any 2G GSM, or 3G network.