The AVN-PXH12 is a world first  it can simply and effectively simultaneously monitor and mix up to 24 AES67 AoIP sources in a compact 1U rack to a speaker/headphone combination in a quick and intuitive way.

The system consists of three parts: a Mix Engine, which forms the central core of this powerful presenter talkback system allowing up to 32 Presenter Remote Control units to control the mix outputs of 1 of 8 virtual mixers (VMs), each mixer having 4 mono channels. Technician Remote Control units can oversee all VMs, adjusting the level of the 4 mono outputs of each VM as an aid to presenters.

The Mix Engine houses the hardware where the complex routing, mixing and DSP functions are performed. This resilient 2U rack has dual hot-swappable AC power supplies and both 1Gb Ethernet & SFP ports.

The Presenter Remote controls the 4 channels of a virtual mixer, using four rotary encoder volume controls which give visual feedback for mix level of the source and actual input level. Multiple units can simultaneously control any of the 8 virtual mixers in the main mix engine with a display on the front panel of the virtual mixer being controlled.

The Technician Remote allows selection of each of 8 VMs and remote adjustment of volume controls.

There are two versions, a freestanding version (AVN-TB6) which can be rackmounted with separate rack plates (AVN-TB6RK), and a desktop version (AVN-6D). 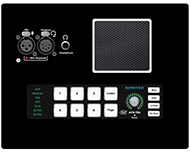 There are 2 versions of the 20 station intercom, rackmount and desktop, and they share the same featureset:

These are a range of 3 audio interface portals which mix and route analogue, AES3, microphone & AES67 stream inputs to analogue, AES3 & AES67 outputs:

Each of the portals can be supplied in different versions: As standard they have a front panel display to show product information and for editing basic IP functionality and they use XLRs and D-types for rear panel connectivity. There are 2 other options available:

The 'D' version portals have front panel input and output metering on 2 bright TFT displays. Metering can show as one of 9 different metering scales and there is a summary view of all input channels with a detailed view of any selected stereo pair. Phase metering is also displayed per stereo channel.

The 'T' version portals use rear panel terminal block connectors for all physical inputs and outputs.

Connect these to the output of the portals to provide a simple headphone amplifier with volume control and button tally. Up to 8 can be connected to each AVN portal.

The passive packs are a range of small utility products which use transformers to change audio input & output impedances and levels and to distribute audio signals.