Sonifex received the IABM Game Changer Award 2015, in the Audio Category, for its Redbox RB-AEC acoustic echo canceller. The presentation was made by IABM at the NAB show in Las Vegas where the RB-AEC was exhibited.

Marcus Brooke, Managing Director of Sonifex said: “We’re so happy to have received this prestigious award. The RB-AEC is a fairly unique product designed for a specific task so we’d like to thank the IABM judges for selecting it above the other entries”.

The Redbox RB-AEC acoustic echo canceller is a digital signal processing (DSP) based acoustic echo canceller primarily designed for studio television and radio presenters - the problem for a presenter is that they often hear themselves in delay in their own earpiece as a result of acoustic feedback in the production gallery or control room. This can cause confusion and miscommunication when the presenter is reading from autocue or listening to countdown signals and talkback. The RB-AEC is used to dynamically remove the delayed control room monitor speaker output from the presenter’s earpiece feed by adapting to the environment in which the control room microphones are placed. 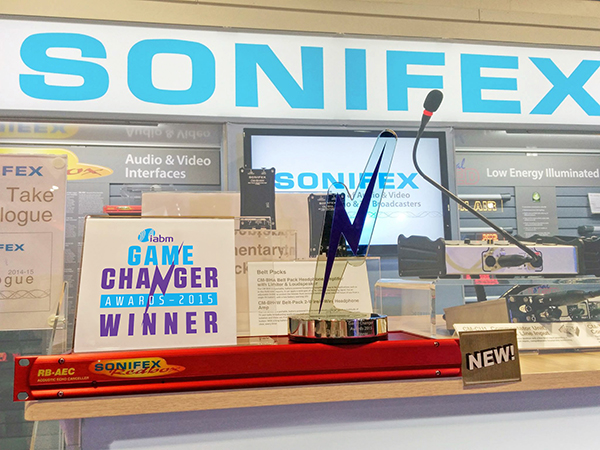